Sperm of most organisms are assumed to be propelled by oxidative phosphorylation, i.e. by the mitochondria. Insects possess two sperm mitochondria, helically wrapped around and along the tail. In Drosophila, sperm mitochondria have a role in the elongation of sperm but other than that, we don’t know much what they actually do – oxphos maybe, maybe not. We would like to know and one possibility to start addressing this question is to monitor sperm metabolism in males and females, such as using autofluorescence lifetime imaging.

If mitochondria fuel sperm metabolism, the exclusive maternal inheritance of mitochondria poses the question how sperm metabolic function, and hence sperm success, can be inherited from father to son. How can then sperm competition drive evolutionary change? Other researchers see a primary role for glycolysis in sperm metabolism. Using advanced microscopy, such as FLIM or a biophysical method to measure reactive oxygen species (ROS) we hope to quantify aspects of sperm metabolism. We choose insects to look into this question – after all, they hold the world record in sperm storage: ant queens of at least two species fertilise eggs with sperm they received 30 years ago. How are the queens doing that without sperm showing age-related damage?

In our ‘manifesto’ of Sperm Ecology (Reinhardt et al. 2015 A Rev Ecol Evol Syst) we present overwhelming evidence that sperm function is altered by the environment. Both sperm and their environment (sperm niche, as we termed it) can evolve but it is not clear how much they contribute to variation in reproductive success – the holy grail of evolutionary biology. We believe that the large evidence for sperm phenotypic plasticity warrants a re-appraisal of some evolutionary assumptions in sperm competition theory.

Soon, we will tell you more about this topic. In collaboration with the Brankatschk lab at BIOTEC and the Wigby lab in Liverpool and the Dobson lab in Glasgow, we have started to become interested in the evolutionary and ecological consequences of lipids.

Lipids in the Sperm Membrane. Sperm naturally are rich in polyunsaturated fatty acids (PUFA). This is odd because PUFA are very susceptible to oxidation and lipoxidation is not quite what sperm need to function. We have recently found that Drosophila when fed plant-based sterols and PUFA produce sperm that emit fewer reactive oxygen species than males fed a yeast-based diet. That’s all so far, we have no idea whether these sterols end up in mitochondria or whether the presence of PUFA in the cell membrane is enough to produce oxygen radicals.

We are also interested in understanding how sperm cells modulate their composition and maintain their functionality under different environmental challenges. Specifically, we explore how dietary lipids (fats, oils, and sterols) affect male fertility. We employ the fly Drosophila melanogaster as a model organism and use various approaches to measure male fertility. We analyze sperm characteristics (numbers, sizes, and motilities), their lipid composition (thin layer chromatography and mass spectrometry), and their metabolism (advanced live-imaging confocal microscopy and FLIM). Additionally, we explore how different diet regimes (vegetal vs. animal fats) at different temperatures impact male fertility.

Related to our project on speciation between bat- and human-associated bedbugs, is the question how the lipids in the blood of bats and the blood of humans end up in the sperm cells. We know that something is going on and we also know it has a relationship to sperm metabolism. Watch this space…

Reproductive immunity involves all immune traits that assist the process of reproduction. These immune responses serve diverse functions, such as the protection and repair of reproductive tissue from mating wounds and transmitted microbes that can potentially lead to sexually transmitted infections, and can also directly bias fertilisation, such as by producing sperm antibodies or other responses that favour fertilisation by some sperm over others.

We study reproductive immunity applying an ecological immunology framework, which is founded on the basic premise that the evolution and use of the immune system are costly and thus must be traded off against other traits, such as survival and reproduction, to balance an organism’s investment into all the traits needed to promote evolutionary fitness. Localising the expression of immune agents in and surrounding attacked host tissues is likely less costly than globalised/systemic immune responses. This reduces energetic costs by keeping the production of immune agents at a minimum. Also, immune agents are used when and where they are needed minimising self-harm. As with the rest of the immune response, we expect the evolution of induced and localised immune responses (relative to constitutive and global responses) to be determined by the predictability of exposure, here being wounding and/or parasite exposure and virulence. To better understand the link between reproduction and immunity as well as its maintenance we investigate selection pressures linking both biological functions and factors, such as mating rate or sperm age/health that will modulate the investment in reproductive immunity (Barribeau and Otti 2020 eLS).

The main approach to mito diseases is to alter metabolism by dietary interventions. Recently we have, therefore, extended our work to cover such effects. This complicates the issue because we found that dietary fat and amino acids differentially affect mito-nuclear interactions, in collaboration with previous Dresden Junior Fellow Dr Adam Dobson, Univ Glasgow.

Our work on bedbugs, mainly Cimex lectularius, spans two decades. Inevitably, we acquired some expertise and so are happy to collaborate on applied research in this area. This work mainly applies to 1) reproduction, 2) physiology and 3) material science. 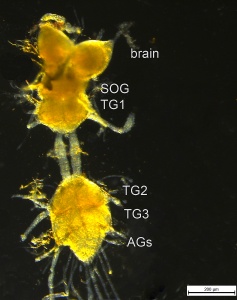 Bedbug Physiology. In collaboration with C. Wegener (Würzburg) and R. Predel (Köln), we were involved in annotation of peptides and peptide receptors. This work is augmented by mass spectrometry approaches to quantify the composition of peptides in different parts of the brain (see left for a picture of the entire nervous system).

Bedbug Material Science. Mainly guided by predictions of evolutionary biology, we search for interesting aspects of material science in bedbugs. For example, we used a microscopy technique based on the decay of the signal of autofluorescent molecules to characterise aspects of the cuticle of bedbugs. Basically, bedbug females have a patch of self-sealing material through which males repeatedly pierce, in order to deliver sperm. We also used this approach to characterise aspects of the metabolism of sperm cells. In collaboration with Dagmar Voigt, we characterised the structures of how bedbugs adhere to surfaces – hypothesising that these structures evolved by sexual selection (attachment to partner), not natural selection.

Bedbug Cultural Significance. We use zoological studies, to inform aspects of the human society, or use cultural aspects to reveal biological particularities. The cultural and natural history of the bedbug is covered in Klaus’ books Literarische Wanzen and Bedbug. We have currently been exploring the connotation of bedbugs in the German-speaking fiction literature in the twentieth century more systematically. Stay tuned for a new book Das Jahrhundert der Wanze.